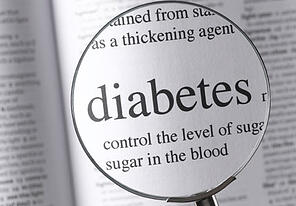 In 1993, almost half of people diagnosed with diabetes were older than 65, making type 2 diabetes a common occurrence in elderly patients.

Elderly patients pose unique cases, as self-management of diabetes comes with greater difficulties once age impairs cognitive functions and  inhibits the ability to safely make changes in exercise and diet. Additionally, identifying and responding to hypoglycemia, which medication may cause, becomes more difficult with age.

Treatment Plans:
Treatment plans include diet change, increased exercise and medication. The success of treatment plans varies based upon a patient's willingness and ability to comply.

Elderly patients should seek out exercise programs appropriate to their age group and physical capabilities. Managing diabetes with exercise can improve insulin sensitivity.

Diabetes Medications
Oral medication prescribed to younger type 2 diabetes patients is also safe for use in elderly patients, with some limitations.

Alpha-glucosidase inhibitors delay digestion of complex carbohydrates and disaccharides. They are useful for elderly patients with mild diabetes.

Thiazolidinediones provide a low risk for hypoglycemia, but should not be used by patients with class III or IV heart failure. Actos (pioglitazone), which is part of the thiazolidinedione class of drugs, increases the risk of bladder cancer.

Symptoms of bladder cancer include blood in the urine, increased need to urinate and pain during urination. Thousands of users have filed lawsuits after developing the side effects of Actos.

Sulfonylureas may be useful, but come with a risk of hypoglycemia. Due to this risk, sulfonylurea treatment should begin with low doses.

Insulin is sometimes necessary, but it should be noted that the risk of severe hypoglycemia from use of insulin increases with age.

Elderly patients have a higher susceptibility to hypoglycemia due to additional factors such as poor nutrition, noncompliance with medications, and impaired renal or hepatic metabolism.

Other conditions may disguise the hypoglycemic symptoms, such as dementia, delirium, depression, sleep abnormalities, seizures, myocardial infarction and cerebrovascular accidents.

Diabetes medications and seniors is complex and unique. Working closely with doctors, family and support systems can help elderly patients to make the necessary diet, exercise and medication adjustments and recognize the warning signs of hypoglycemia.

mmLearn.org offers additional information about diabetes and the elderly - We currently have videos on diabetes in both Spanish and English.