When Does Caregiving End? 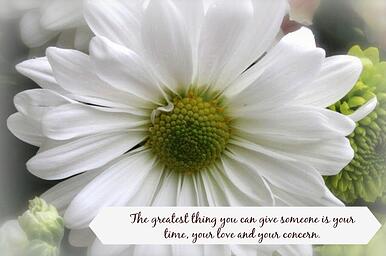 Growing up right in the middle of an older sister, Janie, and Ruth, her younger sister, Joyce never really gave much thought to what that would mean when her parents got older and the expectations that would be placed on her. Busy with her own life, working alongside her husband, Mark, in their family business, it didn’t take long for her to realize that her ailing fathers’ need for caregiving was more than her mother could handle. Always the one to take the initiative in her family, Joyce made visits to her parents several times a week making sure bills were paid, house was clean, groceries were stocked and when the time came, made the very difficult decision to place her dad in a nursing facility. While this move did lessen the burden on her mother, it also meant that Joyce was now making those weekly visits to both her father in the nursing home and her mother, who was at this point developing some critical health issues of her own, having been diagnosed with early onset dementia.

The death of Joyce’s dad understandably escalated her mother’s illness and the decision was made to move her mom and her older sister, Janie, to an assisted living residence. Although her sister had some learning disabilities, living together they were able to help each other.  Even though her mom’s dementia sometimes made her confrontational and difficult to care for, Joyce continued her ritual of almost daily visits making sure they were safe and as comfortable as possible.

It was not until the death of her mom that the dramatic changes in their lives occurred. Janie had since also been diagnosed with dementia and could no longer live on her own.  While this decision caused some pretty intense disagreements, after 50 years of marriage, Mark knew this was one argument he wasn’t going to win. So Janie moved in with them!  It would be an understatement to say that their lives changed. Janie’s dementia often made them all strangers, she couldn’t be left alone for any length of time, her wandering kept them up nights and even their casual evenings out for dinner had to be carefully timed since being out too long made Janie uncomfortable and anxious.  After five years the stress and tension of caring for Janie in their home was taking a heavy toll not only on Joyce but on their marriage as well and this time Mark won the argument.  Janie was admitted to a nursing home where she is today. The attentive care Janie receives is clearly due to Joyce’s weekly visits when she picks up her laundry to wash at home, making sure her hair is done and primarily letting the entire staff know who she is and the kind of care she expects for her sister.

So when does the caregiving end? Joyce, like thousands of other caregivers, goes about doing what needs to be done as long as it’s needed and as long as she’s able. And although it is not always easy, she gives her time with love and concern. Are you a caregiver?  mmLearn.org is committed to providing free online support and training for caregivers of older adults. Check out some of our videos to help with your caregiving including – Families Coping with Dementia - presented by Maria Wellisch, RN, LNFA and Caregiver Stress Related to Dementia by Dr. Liliana Oakes or any of our more than 300 other free online videos.