Many older Americans are turning to a surprising source for alleviating for their age-related aches and pains, according to a recent report from The San Diego Union-Tribune: medical marijuana. However, this can be tricky territory for caregivers given that the drug is banned by federal law, and has only been approved for medical use in 29 states. Here’s a closer look at the issue.

Why are so many seniors choosing to “just say yes” to marijuana? No, they’re not looking for a high or fix, but rather for relief from chronic pain, and a number of different medical conditions, including arthritis; muscle spasms, including those associated with multiple sclerosis; neuropathic pain; unintentional weight loss; and the side effect of chemotherapy, including nausea and vomiting. Research even suggests that marijuana may also be used as a treatment for dementia, including Alzheimer’s disease, and Parkinson’s disease.

“The twin issues of prescription drug costs and opioids have been among the country’s most pressing concerns for months, and have defied easy policy solutions. But these problems might have at least one cheap and unmistakably pungent partial solution: medical marijuana. A growing body of research indicates legalization of medical marijuana is associated with lower health-care costs and fewer prescriptions for seniors and also associated with reduced deaths from opioids.”

As a result, many once-wary seniors have become cannabis converts. As one grandmother of six told the Union-Tribune, “I would be in a lot worse shape if I wasn’t using cannabis, both physically and mentally.”

While marijuana is a promising treatment for seniors, it’s not without its potential pitfalls. Says the Union-Tribune, “As older people come to represent an emerging frontier in the use of marijuana for medical purposes, questions are being raised about safety and accessibility. Even in states where medical marijuana is legal, older people who stand to benefit often cannot get it. Most nursing homes do not openly sanction its use, and many doctors are reluctant to endorse pot use, saying not enough is known about the risks in the oldest age groups.”

Even when accessibility isn’t an issue, however, experts point to the fact that marijuana may have a different, more pronounced effect on seniors than on younger people, and that that research to date is inadequate in this area. For seniors who may be more sensitive to the drug, there may be harmful effects, including confusion, dizziness, and the increased likelihood of falls and fall-related injuries.

Because of these and other concerns, policy experts say that managing marijuana use by seniors is a significant endeavor and still in its early stages. As University of Iowa professor of health policy, Brian Kaskie, told the Union-Tribune, “It’s a bigger issue than we thought. This is an elephant we’re just starting to get our hands on.”

Echoed Cari Levy, vice president of AMDA — The Society for Post-Acute and Long-Term Care Medicine, ““People are using it, and we need to know how to respond.” 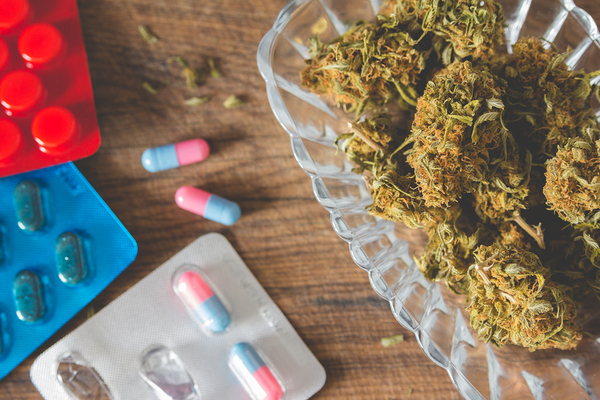 While the Union-Tribune provides one example of a nursing home which allows residents to purchase marijuana from a dispensary, store in their rooms, and take it on their own (i.e. with no staff involvement), the majority of facilities are subscribing to a “don’t ask, don’t tell” approach. Unfortunately, this, too, can lead to problems when caregivers don’t factor the drug’s use into a resident’s care plan.

Still, the long-term advantages of marijuana use among seniors may outweigh the short-term complications, meaning that even more seniors and caregivers may be embracing medical marijuana moving forward. Concludes The Atlantic,

“ Support for the drug seem to be expanding among both medical professionals and the public at large….Medical marijuana increasingly looks like a useful tool in [the two-front war against health-care costs and the opioid crisis] —and the rare health policy that makes health care both cheaper and more effective.”

mmLearn.org offers a large library of free videos for caregivers of older adults, covering topics pertaining to senior care. Whether you are a healthcare professional or a family caregiver, if you are caring for an older adult we know that you will find mmlearn.org an essential learning and guidance tool for all of your caregiver training needs. For more useful content for caregivers, including on the topic of seniors and substance abuse, access our database of free caregiver training videos today.