More than a million people get sepsis every year. As many as 30 percent die as a result, according to the NIH’s National Institute of General Medical Sciences (NIGMS). This is a particularly important senior health issue as the elderly are at increased risk of this life-threatening illness. Here’s a closer look at sepsis, along with caregiver tips for spotting it in seniors. What is Sepsis?

“Sepsis is a serious medical condition. It is caused by an overwhelming immune response to infection. The body releases immune chemicals into the blood to combat the infection. Those chemicals trigger widespread inflammation, which leads to blood clots and leaky blood vessels. As a result, blood flow is impaired, and that deprives organs of nutrients and oxygen and leads to organ damage….In severe cases, one or more organs fail. In the worst cases, blood pressure drops, the heart weakens, and the patient spirals toward septic shock. Once this happens, multiple organs—lungs, kidneys, liver—may quickly fail, and the patient can die."

Sepsis, which can also be called “blood poisoning,” can be caused by many different types of microbes, although bacteria is a common cause. It is a major cause of hospital re-admissions as well as a leading cause of death in hospitals.

While anyone can get sepsis, seniors are especially vulnerable with cases among older adults on the rise. Elderly people constitute 65 percent of all sepsis cases and may be as much as 13 times more likely to get sepsis than younger people, according to verywell. Not only that, but the mortality rates in elderly patients with severe sepsis and septic shock may be as high as 60 percent.

According to a recent journal article published in the World Journal of Critical Care Medicine,

“The incidence of severe sepsis and septic shock is increasing in the older population leading to increased admissions to the intensive care units (ICUs). The elderly are predisposed to sepsis due to co-existing co-morbidities, repeated and prolonged hospitalizations, reduced immunity, functional limitations and above all due to the effects of aging itself. A lower threshold and a higher index of suspicion are required to diagnose sepsis in this patient population because the initial clinical picture may be ambiguous, and aging increases the risk of a sudden deterioration in sepsis to severe sepsis and septic shock.”

How Caregivers Can Help

In addition to increased vigilance by physicians, senior caregivers can also play a vital role in identifying sepsis in order to best support prompt diagnosis and treatment. Signs and symptoms of sepsis include fever, chills, rapid breathing and heart rate, rash, confusion, and disorientation, according to NIGMS.

Unfortunately, the common nature of many sepsis symptoms can make the condition challenging to diagnose. Says verywell,

“The criteria say that the person needs to have at least two of the following symptoms for sepsis to be strongly suspected, but in the case of elderly people, the presence of one of these symptoms probably warrants a call to the doctor.” 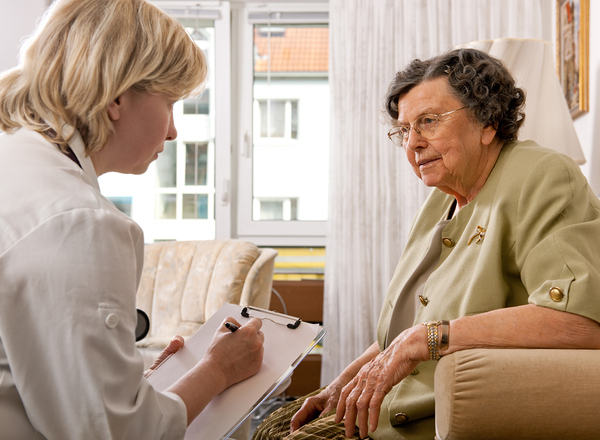 Additionally, if your aging loved one has a recent cut or scrape, has been bitten or stung by an animal or bug, recently had surgery or another invasive procedure, has been ill with the flu, or has any signs of infection, such as coughing, belly pain, a urinary tract infection, bedsores,  an oral abscess, or an ingrown toenail, experts recommend seeking help immediately.

Again, as many septic cases go undiagnosed, voicing your concern that sepsis may be involved can help healthcare practitioners quickly zero in on the condition.

The good news? Many people recover from sepsis and go on to lead normal lives. However, others may suffer from complications, including everything from permanent organ damage to a weakened immune system and higher risk for future infections. Because a quick diagnosis can make all the difference, the attention and advocacy of caregivers are especially critical for safeguarding senior health from sepsis.

mmLearn.org offers a large library of free videos and blog entries for caregivers of older adults, covering senior caregiving topics, including transfer trauma, bedsores and pressure ulcers, to Whether you are a healthcare professional or a family caregiver, if you are caring for an older adult we know that you will find mmlearn.org an essential learning and guidance tool for all of your caregiver training needs. Access our database of free online caregiver videos to continue learning today.