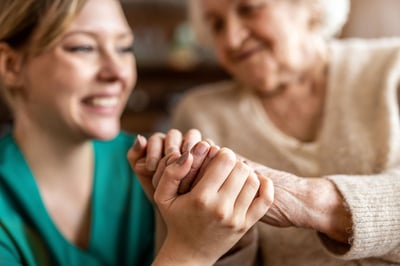 When people with dementia experience disorientation, confusion, or anger, it can be difficult for caregivers who are trying to communicate and care for them in a compassionate way.

That’s why Validation Therapy, or the Validation Method, is such a useful way of approaching people with dementia.

In the briefest terms, it is a way of empathetically entering the world of someone who has dementia. Instead of fighting with them to accept your reality, you practice entering theirs.

What are the components of the Validation Method? And how can caregivers incorporate Validation into their everyday interactions?

Naomi Feil, the creator of the Validation Method and founder of the Validation Training Institute, was raised among older people. Her father was the administrator of a nursing home in Ohio, and her mother was a leader in the Social Services Department. After earning a master’s degree in social work from Columbia University in New York City, she devoted her life to innovating in the field of elder care. In 1982, she published Validation: The Feil Method, followed by The Validation Breakthrough in 1993. Since the 1970s, she and her husband have traveled the world sharing this approach in workshops and educational events.

When Feil was growing up in Cleveland in the 1960s, nurses were using Haldol to sedate patients and were tying patients into chairs to “protect them.” Similar things are still happening today when professional and family caregivers try to stop people with dementia from expressing their emotions.

The Validation Method is based on the theory that older people are often engaged in a struggle to resolve unfinished life issues before they die. It outlines four progressive stages of behavior.

It can be extremely difficult to watch a loved one go through these stages that progress to the end of life. But Validation offers hope that caregivers can spend more quality time with their loved ones by entering their world, on their terms.

The Validation Training Institute shares the following 11 principles as the core of the approach.

Alzheimers.net shares the following example of using Validation when a person with Alzheimer’s disease is convinced that her daughter has been stealing her belongings. Instead of confronting the mother, the daughter could say, “It was a beautiful ring. How did you and Dad meet?” Or if a patient believes a doctor is her husband and asks him to take her home, the doctor could say, “You want to be back in your house. What would you do there?”

These simple, respectful validations help the person feel heard and acknowledged. Over time, these compassionate interventions can help older people find more peace at the end of their lives.

Beginning and Ending with Empathy

Validation is not an instant fix for dementia-related behaviors. But when the approach is paired with other helpful dementia caregiver tips, it can help family and professional caregivers and professionals working with older individuals.

Feil believes that Validation is a true expression of empathy. “Empathy is often misunderstood,” she says. “Empathy is the skill where you put your own emotions, judgements, and extraneous thoughts off to the side and enter into the emotions of the other person. This is different than understanding or caring or having sympathy.”

When our elders are facing the ends of their rich lives, we need to muster all the compassion and connection we can to honor these relationships.

As Feil puts it, “It’s a way to be a better human being and a better caregiver.”