What Caregivers Need to Know about Lewy Body Dementia

Lewy body dementia (LBD) is one of the most common forms of dementia, and yet it is frequently misdiagnosed as more commonly known illnesses, such as Alzheimer’s disease and Parkinson's Disease. If you’re caring for someone who has been diagnosed with LBD, you’re not alone if you feel like you’re in the dark. Read on for a closer look at this complex disease, along with what caregivers should know about LBD.

What is Lewy Body Dementia?

According to the Lewy Body Dementia Association (LBDA), “Lewy body dementia (LBD) is a progressive brain disorder in which Lewy bodies (abnormal deposits of a protein called alpha-synuclein) build up in areas of the brain that regulate behavior, cognition, and movement.”

Impacting roughly 1.4 million individuals and their families in the US, LBD is “an umbrella term for two closely related clinical diagnoses: Parkinson’s disease dementia and dementia with Lewy bodies (DLB),” says the LBDA.

While researchers are still determining the causes of LBD, its onset is believed to be multi-factored with risk factors including certain diseases and health conditions, genetics, and lifestyle.

The Painful Truth about Lewey Body Dementia - An up close and personal story of caring from a caregiver's perspective -  Dawn Hamilton was motivated to share her experiences of caring for her husband who suffered from Lewy Body Dementia in hopes of helping others who are experiencing this difficult disease. She shares actual footage of her husband John's painful hallucinations, her thoughts and feelings about the difficulties she faced convincing doctors that something was not right, her advice about what she learned along the way, and how laughter helped them get through some of the difficult days.

While distinguishing LBD from other forms of dementia can be difficult, early and accurate diagnosis is of critical importance as certain medications may be more favorable to people with LBD when compared to people with Alzheimer’s, while others may be less favorable and even dangerous for people with LBD.

Which begs the question: Given the similarities between LBDA and Alzheimer’s disease, what should caregivers be looking for to determine if LBD may be present? Says the LBDA, “Some individuals will start out with a memory or cognitive disorder that may resemble Alzheimer’s disease, but over time two or more distinctive features become apparent leading to the diagnosis of ‘dementia with Lewy bodies’ (DLB). Symptoms that differentiate it from Alzheimer’s include unpredictable levels of cognitive ability, attention or alertness, changes in walking or movement, visual hallucinations, a sleep disorder called REM sleep behavior disorder, in which people physically act out their dreams, and severe sensitivity to medications for hallucinations. In some cases, the sleep disorder can precede the dementia and other symptoms of LBD by decades.”

Additionally, some people may develop movement disorders resulting in a Parkinson’s diagnosis before developing LBD symptoms, while others will first present with neuropsychiatric symptoms leading to an LBD diagnosis.

“Regardless of the initial symptom, over time all three presentations of LBD will develop very similar cognitive, physical, sleep and behavioral features, all caused by the presence of Lewy bodies throughout the brain,” concludes LBDA.

While there’s no cure for LBD, doctors can treat individual symptoms through medication, as well as non-drug therapies, including physical therapy, speech therapy, occupational therapy, individual and family psychotherapy, and participation in support groups. 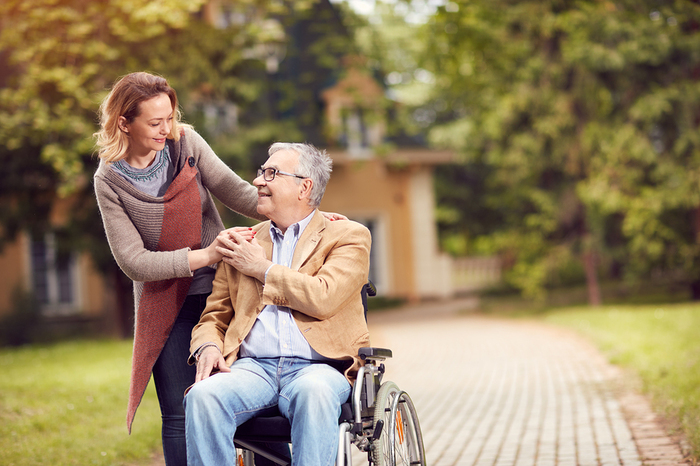 Additionally, there are some things caregivers to do help loved ones living with the disease, including speaking clearly, encouraging exercise, providing mind stimulation, and establishing bedtime rituals.

A large part comes down to simply being there in a supportive way. Says the Mayo Clinic, “People with Lewy body dementia often experience a mixture of emotions, such as confusion, frustration, anger, fear, uncertainty, grief and depression. Offer support by listening, reassuring the person that he or she still can enjoy life, being positive, and doing your best to help the person retain dignity and self-respect.”

At the same time, LBD caregivers must also prioritize their own health—especially given the fact that LBD’s unique “combination of cognitive, motor and behavioral symptoms creates a highly challenging set of demands for continuing care,” says LBDA. In addition to asking for help and adopting healthy lifestyle behaviors, caregiver support groups and education can bolster caregivers' abilities to provide the very best care without sacrificing their own health and wellness.

mmLearn.org offers a large library of free videos for caregivers of older adults, covering topics pertaining to senior care. Whether you are a healthcare professional or a family caregiver, if you are caring for an older adult we know that you will find mmLearn.org an essential learning and guidance tool for all of your caregiver training needs. Access our database of free online caregiver videos to get started today.