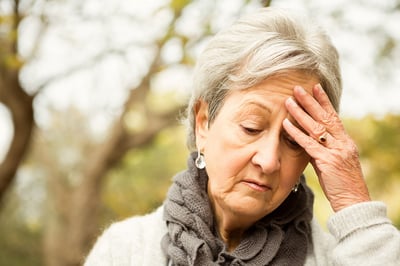 Lewy body dementia (LBD) is one of the most common forms of dementia. However, it is frequently misdiagnosed as more commonly known illnesses, such as Alzheimer's disease or schizophrenia.

Caring for someone with dementia can be scary, confusing, and overwhelming. If you feel like you’re in the dark, you’re not alone.

Below, we take a closer look at the symptoms of LBD and unpack what caregivers should know about this complex disease.

What is Lewy Body Dementia?

According to the Lewy Body Dementia Association (LBDA), “Lewy body dementia is a progressive brain disorder in which Lewy bodies (abnormal deposits of a protein called alpha‑synuclein) build up in areas of the brain that regulate behavior, cognition, and movement.”

The National Institutes for Health explains that LBD is an umbrella diagnosis for two similar types of dementia: dementia with Lewy bodies (DLB) and Parkinson’s disease dementia. No matter the type, LBD impacts roughly 1.4 million American individuals and their families.

Researchers are still determining the causes of LBD. In general, experts believe the cause is multifaceted and influenced by risk factors that include certain diseases, preexisting health conditions, genetics, and lifestyle.

Patients with LBD have the same memory impairments as those with Alzheimer's disease, vascular dementia, and other types of dementia — aphasia, apraxia, agnosia. So what makes LBD unique?

People with LBD also experience at least two out of three of the following symptoms:

If your loved one has two out of three of the symptoms described above, this means they meet the criteria for LBD.

People with LBD who experience visual hallucinations will see fully formed, detailed images that aren't there. Hallucinations can look like many things, but they often take the following forms:

Hallucinations from LBD are distinct from the types of hallucinations you might see in pop culture. These images are not shadowy figures in the corner of a patient’s field of vision. They’re clear as day.

Sometimes your loved one’s hallucinations will be benign. At other times, they’re frightening.

Finally, some people with LBD also lose their facial expressions.

Some people with LBD experience period “spells,” otherwise known as fluctuations of consciousness.

A fluctuation in consciousness might be an episode of classic sundowning, when your loved one becomes confused and disoriented around nightfall. Fluctuations of consciousness can also look like a change of personality or wakefulness throughout the day. These “spells” could be daily or far less frequent.

This is one of the most challenging LBD symptoms for doctors to confirm. That’s because “spells” are unpredictable and sometimes infrequent.

According to the LBDA, “Some individuals will start out with a memory or cognitive disorder that may resemble Alzheimer’s disease, but over time two or more distinctive features become apparent leading to the diagnosis of ‘dementia with Lewy bodies’ (DLB).”

The LBDA says symptoms will gradually differentiate from Alzheimer’s symptoms. The following symptoms are signs of LBD instead of Alzheimer’s:

Sometimes the sleep disorder can also precede dementia and other signs of LBD — even by years or decades.

No matter which symptom you noticed first, all people with LBD experience a similar decline in cognitive, physical, and behavioral health over time. Most also experience sleep problems. This is all due to the Lewy bodies present in the person’s brain.

Dawn Hamilton, a caregiver whose husband John developed LBD, graciously shared her personal story of living with someone from LBD. Caregiver perspectives are a valuable way to help others who are experiencing this difficult disease.

In this video, Dawn shares the following:

There is no cure for LBD. However, doctors can treat individual symptoms through medication and non‑drug therapies. Non‑pharmaceutical therapies include:

As a caregiver, you can be an incredible support to your loved one with LBD. Try encouraging conversation, exercise, and mental stimulation. It's also helpful to establish structured activities and bedtime rituals.

According to Mayo Clinic, “People with LBD often experience a mixture of emotions, such as confusion, frustration, anger, fear, uncertainty, grief and depression. Offer support by listening, reassuring the person that he or she still can enjoy life, being positive, and doing your best to help the person retain dignity and self‑respect.”

Never underestimate the power of your presence and support

At the same time, caregivers must also prioritize their health too — especially since LBD’s unique set of symptoms and steady decline can be physically demanding and emotionally challenging. So while your loved one with LBD needs care and support, don't forget your own needs.

All of these things can help you provide the best care without sacrificing your own health and wellness.